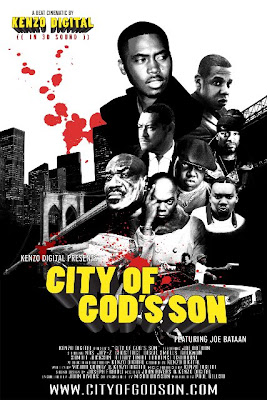 “City of God’s Son” is an experimental hip-hop opera starring Nas, Jay Z, Ghostface, Biggie Smalls, Raekwon, Samuel Jackson, Delroy Lindo, and Laurence Fishburne. It is a crime drama/coming of age tale of three fictitious characters growing up in a crime ridden mythical city in a jungle. This project explores the icon of the gangster in modern media, and weaves musical history and gangster film history into an operatic music based story of brotherhood and survival. An homage to 90’s New York hip-hop, “City of God’s Son” is the redefinition of the remix. Featuring legendary soul singer Joe Bataan. A sound film/hip hop opera by Kenzo Digital.

nice post, how old is the trailer, all the rappers look'n a lil young in that...lol