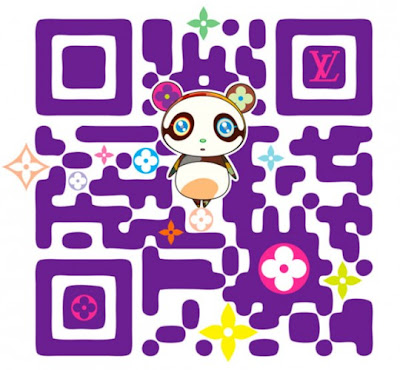 Louis Vuitton has worked with their long time collaborator Takashi Murakami and agency SET to offer the first Designer QR Codes, which to date have been looking pretty boring. We have mostly come across these codes and Asia so far, but they should make it over eventually.

“QR Codes are the bar codes of the future, linking online and physical graphics to websites and multi-media. For the most part, the codes have still maintained an abstract look akin to their predecessors. A newly released designer QR symbol, produced by Tokyo based creative agency SET is looking to change all that with a stylized remake of the standard code. Mixing design with technological innovation, SET teamed up Takashi Murakami with Louis Vuitton to create a distinctive code featuring one of the artist’s characters and the classic LV pattern. The agency hopes this will add much needed style and character to the bland world of machine readable codes” Via PSFK, FAD.

great...I thought I had a unique idea when I used a code like that for a mixtape cover and let pac man crawl through it....